Have you ever dreamed of being an 80’s themed Narwhal, majestically floating through outer reaches of the cosmos jousting other equally majestic 80’s themed Narwhals on a deathmatch stage? If so then Starwhal developed by Breakfall may be the game for you! Starwhal is a fun, brightly colored game with a lot of attitude and fast paced deathmatch scenarios where one to four players are able to face off in a jousting-like match on five different 2D stages. The Players are able to customize the color, head, and body of their individual Narwhal for epic interstellar battle in costumes that reference popular themes such as Star Wars, Nyan Cat, Street Fighter, Dr. Who and many more.

The game itself is LAN only (or offline) and has two types of gameplay: Challenges and Game Modes. In the Game Modes selection, there are four modes which a player can delve into. The first one is the Classic mode, which is the standard faceoff between one to four players, and is the underlying theme for gameplay in the other modes. In this mode, Players attempt to strike another player/AI’s heart with the horn of the Narwhal in a fashion similar to games such as Ostrich Jouster, but with a small twist. Whoever eliminates the other players hearts wins the match, though the players can win in many different ways with each mode offering options such as winning by lives, or timed score. The controls are largely momentum based; you launch your Narwhal in a direction, and based on your speed you can alter its direction. The controls are initially frustrating but become second nature after a bit of gameplay.

The other match types that the game comes with feel similar enough to the Classic mode that they aren’t too intimidating initially. Score attack is almost identical to Classic, but the player with the highest score wins, where in Classic the last player alive wins. The third mode, Zones, is less exciting than the first two. It puts emphasis on a player taking control of a bubble and gaining points by having dominion over that zone until another player is able to gain control. If the player wishes to control the  zone they must hit the tiny circle inside of the large bubble, which is sometimes a feat in itself. That being said there are only a handful of zones per map, making the gameplay competitive.

Fourth on the list of Game Modes is Heart Throb, which is basically Capture The Flag, but is not truly worth playing with less than two people. The mechanics of the game lead this mode to be dull, because the first player to grab the ‘heart’ tends to keep it. With the game controls working the way they do, a player is able to keep the heart away from other players with ease by simply lying on the ground, or is able to easily escape the other player by simply playing keep away. This is a difficult mechanic to get around especially for new players because it can be challenging to hit the heart of the other player in the first place. Sadly this leads to a game mode that doesn’t really do much unless you extend the time and play with more than two people.

The five maps that Game Modes displays are each different and entertaining, with each map sporting five separate and unique instances players can choose from. For instance, the map Spacetopus has an instance called Bouncy Ball Brawl which spawns a massive quantity of small balls that fill up most of the stage making the player feel as if they are in a ball pit. This fun and unique mode is special to Spacetopus, whereas another map instance may have vector pads that rocket players from place to place which would be a unique instance to that particular map.

Although this game has a strong focus on a showdown feel, this game actually holds up quite well in its other gameplay mode, Challenges. In Challenges, the player is able to pick between Targets and Obstacles. Targets is just what it sounds like, where the Player is timed and is awarded Platinum, Gold, Bronze, or Black (no medal) depending on how quickly they can break all of the targets. Obstacles forces the player to scale walls and dodge instant death. Each mode can be set to Easy, Medium or Hard, with the last difficulty living up to its name. The momentum based controls make both of these modes difficult and seemingly impossible to earn Platinum on if set to the hardest difficulty. Regardless it is a good challenge for players that are looking for more out of the game.

Overall, Starwhals is a fun game with good customization and fun gameplay. Outside of playing it with friends or at a party it may not hold long term excitement, but it is certainly a light hearted game good for a few laughs. Getting used to the ‘simple’ controls (which being physics based causes many to initially struggle with them) are good for a few laughs for first time players and veterans alike. 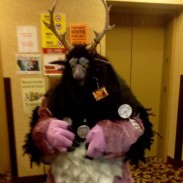 We're talking all about our experiences in patch 6.3. Story spoilers within.

Lightkeeper Protocol #68: The Second Verse and The Raintrace

We're going to save the Land Gods and explore Lowland Clan territory.

Yip joins Bob & Mel to talk about their journey into Ulduar.